I was eager to head south in Argentina toward Patagonia when I left Mendoza. Images of glaciers and snow-capped mountains and alpine scenery danced in my head. Then I found out that Puerto Natales, my intended destination, was over 50 hours by bus.

Learning this news after a 24 hour bus ride through Chile, I was not ready to commit to that much time on the bus again so soon. I consulted a map and settled for Bariloche, the northern gateway city to Patagonia in the Lakes Region, which was less than half the distance of my original itinerary. And I was satisfied with this plan.

Except for the whole bus ride there looked like this: 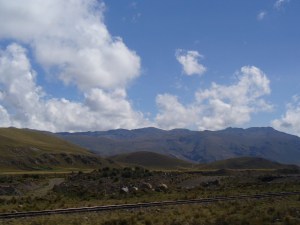 For those of you who have been following along, you will know that at this time on the journey I had been suffering from an acute case of desert fatigue. Where were all the trees? the lakes? the snow? It was only in the last half hour of the trip that I saw glimpses of water.

I tried really hard to enjoy Bariloche. I really did. It sits picturesquely on a lake ringed with mountains (with the slightest dusting of snow on top). Its streets are lined with flowery trees, ice cream parlours and outdoor sport stores. Tours and spectacular hiking trips are sold on the street corners. Fancy European chocolate like the Mamuschka sells for $50/kg. I preferred to indulge in the far more affordable chili-laced hot chocolate and watch the local drivers parallel parking on the steep roads. One man struggled to make a seventeen point escape from his spot, where he had been boxed in. Combine this tight space with the steep incline of the hill and the rollback effect of standard transmission, and of course he hit the other two cars. What I found very amusing was that he did so on purpose. This driver shamelessly backed up into the car behind him to gain the space he needed to exit. There were a number of scratched up fenders in Bariloche, so I had to wonder if this was a common technique.

That amusing incident aside, Bariloche was not cutting it. Maybe I had worn myself out with an activity-tour frenzy after recovering from chicken pox. Maybe the desert had sucked more out of me than I had realized. Maybe I was numbed by hours and hours of bus travel and bad Chuck Norris movie voice-overs. But I just couldn’t get excited about anything in Bariloche.

I just wanted to relax and chill out. I had the whole year, I told myself. I do not have to spend every single day doing and trying new things, I reasoned.

So I booked a ticket to Mar del Plata, an ocean-side resort town . This ride took me through endless fields of sunflowers. I arrived to a resort town on the east coast of Argentina where the silver ocean gleamed and where people dressed up as Spiderman, Barney and Snow White tried in vain to sell me a ticket for party buses. I spent the next week lying around at the beach and doing nothing remarkable whatsoever. It was heavenly.

This was a crucial lesson for me about long-term travel. Sometimes you need a vacation from your vacation. It is a very different mentality than a ten day getaway where you cram a ton of fun into your brief holiday. You have to pace yourself and relax into a different travel rhythm. Doing too much too fast for too long will have you missing your couch at home instead of planning your next stop.

6 thoughts on “Taking a Vacation From My Vacation in Argentina”