One of the things I was most excited about seeing in Australia was a kangaroo. I had watched Dot and the Kangaroo about a hundred zillion times as a child and was still holding out hope that maybe, just maybe, I would be able to talk to the kangaroos like Dot could. What kid doesn’t wish they could talk to animals?

Unfortunately, my first encounter with a kangaroo in Australia did not live up to my imagination.

Instead of happening upon a herd of them bounding footloose and fancy-free across the Outback and ready to be my new best animal friends, the first kangaroo that I saw in Australia was served to me on a plate.

I had brought this situation upon myself. You see, kangaroos are the raccoons of Australia. People from other places think they are adorable, furry, and delightful. People who live with them despise them as giant pests that plague their homeland. Unwisely, I had started a debate about the pros and cons of kangaroos with my Australian roommates. When they were done criticizing kangaroos for being smelly, overgrown rodents that cause car accidents and are a general nuisance, they finished with the trump point that kangaroo meat is not fit for dogs.

I foolishly asked what it tasted like, at which point they all admitted they had never actually eaten kangaroo. Which led them to deciding that we should all eat some kangaroo to decide for ourselves if it was edible.

So my first encounter with a kangaroo was not like this: 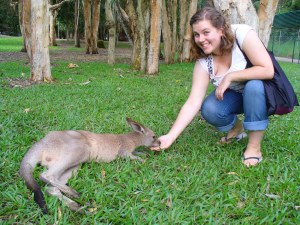 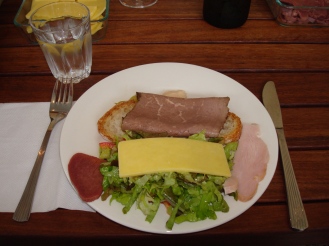 Roast kangaroo on the left

And that is how my new best animal friend became my dinner. Sorry, Dot and friends.