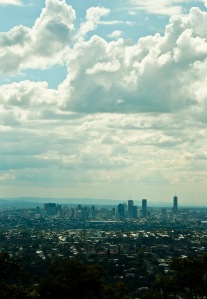 Brisbane is a bit overlooked as a tourist destination in Australia because it is often viewed as a hub city, a jumping off point to get to Fraser Island or the Gold Coast, Queensland’s more famous tourist attractions. As a major urban center and the capital of Queensland, it has plenty to offer someone visiting for more than a day or two. 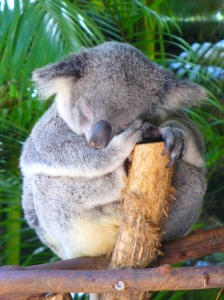 Mount Coot-tha – has a lookout with the best view of Brisbane. Particularly beautiful at night (watch out for teenagers making out in their cars in the lower parking lots).

Queensland Cultural Centre – home to the Museum of Queensland, the Art Gallery, the Library, etc. The museum had a good range of exhibits about Australia and Queensland. Best trivia I learned from here? Australia had its own dinosaur called the muttaburrasaurus.

South Bank – refers to the south bank of the Brisbane River in the CBD, home to some nice, family-friendly museums, galleries, festivals and restaurants. It is also the location of the man-made beach on the Brisbane River, and is particularly nice at night as the city lights come on.

ANZAC square – pretty plaza to take a breather and enjoy an outdoor snack near Central Station.

Botanic Gardens – has some of the funkiest trees that I have ever seen. Was a little concerned that prehistoric spiders/snakes might live inside them. 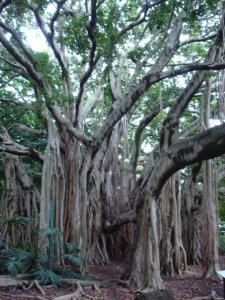 – I have only included this museum in order to advise against going. This place was advertised as a history of the Brisbane penal colony, which sounds cool, but this is a big misrepresentation. The building itself was constructed by convicts. The museum inside was a very dry exhibition on the separation of Queensland from New South Wales as its own state with artifacts completely unrelated to the storyline. Example: the dialogue between the governors here and Queen Victoria over the name of the new state was presented above a printing press, with no explanation about why the printing press was in place.

Big Pineapple – heritage site of a really big fiberglass pineapple. You can go inside the pineapple, take a tour of a macadamia nut farm next door, and buy all the pineapple-related souvenirs you could ever want at their shop.

Australia Zoo – a wonderful zoo and home of the Crocodile Hunter, Steve Irwin. His family still works there promoting conservation education. The Crocoseum show demonstrating the capabilities of crocodiles and anacondas was riveting. Less enjoyable was Bindi Irwin singing a song called “I Love Horses” but those under ten ate it up.

Noosa – where Australians holiday on the Sunshine Coast; has lovely national park on beach headland. And they sell gelato.

Montville – very charming hinterland town nestled into a mountainside with a panoramic view of the coastline. Full of hippies.

Glass House Mountains – these are some very lovely mountains just outside Brisbane. My Australian friends were all very eager to tell me the story behind their name, which they all learned in primary school. Except that they had forgotten it. Thankfully, my friend the Internet remembered some key details… Captain Cook, the Columbus of the Southern Hemisphere, saw the mountains from his ship and remarked that their unique shapes made them look like the glass houses of his homeland in Yorkshire, hence their name. There is also an Aboriginal legend behind these mountains, where each mountain represents a member of a family. The father Tibrogargan noticed a flood was coming and asked one son Coonowrin to help his pregnant mother Beerwah to safety. The son ran away to save himself and when dad found out, he was so angry that he smashed his son’s head with a club, leaving the son with a terrible crook in his neck. The son tried to apologize and everyone wept at his cowardice, creating all the rivers and streams in the area. But the father wouldn’t forgive him and turned his back on him forever. Which is why the father mountain faces away from the son mountain and the poor mom mountain is still pregnant (Note: it takes a long time to give birth to a baby mountain).

One thought on “Brisbane: Beautiful One Day, Perfect the Next.”