I think one too many adorable cartoon monkeys on Paul Frank gear and baby couture has convinced the world that monkeys are wonderful. An awful lot of people think that monkeys are the most adorable creatures ever to grace the Earth. Clearly, these people have never cuddled a koala, or a sloth, or an alpaca, and I am sad for them. I would also guess a lot of them live in Hollywood, judging by the volume of monkey-themed movies that get churned out.

If you are one of these people who blindly adhere to the belief that monkeys are the greatest, kindly escort yourself to another corner of the internet. You will not enjoy what I have to say next. If you are willing to entertain the notion that maybe, just maybe, monkeys are horrible, please read on. 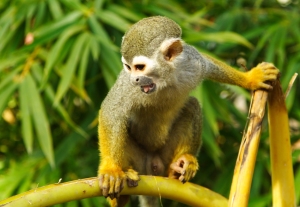 *Note: Gorillas are obviously an exception to this statement, because they are awesome.

Since I was raised by an anti-monkey mother, I already had a bias against them, but my encounters with monkeys on my travels only confirmed for me that monkeys are horrible, beginning with the Batu Caves in Malaysia.

When I read about the Batu Caves outside of Kuala Lumpur, I was put off by the description of the 272 steps to be climbed to reach the caves. 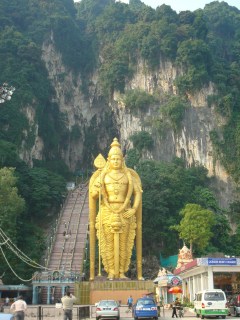 That is a lot of stairs.

Climbing 272 of them was not high on my list of to-do’s. However, sometimes great things await one at the top of giant staircases and I could not risk missing out on something great because of a small mountain of a staircase.

I had been sure that those 272 stairs would be the worst part of my day. That was until I stood at the bottom of the staircase and saw all the rat bastard monkeys in my way.

Please note that 3.7 seconds after this photo was taken, my travel buddy was attacked by a monkey, intent on robbing her backpack, while another glared at us menacingly while strutting around his monkey girlfriend. I instantly recalled the monkey villains that haunted my nightmares: King Louie of the Apes from the Jungle Book, the baboon horde in Tarzan, the disease carrier monkey in Outbreak, and of course, the ape overlords from Planet of the Apes. We endured many more hisses and glares from these aggressive jerk-faces before reaching stair #272 at the top.

I might have been able to enjoy the cool caverns that are home to Hindu temples inside this mountain if the monkeys had stayed outside, but they trailed after us in the dark, growling all the way.

Monkey rant aside, the Batu Caves were worth the climb. On a clear day, there probably would be a great view of Kuala Lumpur and the inside of the caves was lovely.

Just watch your back.

[Note: I appreciate that any wild animal that is exposed to human contact is going to misbehave. However, this was not an isolated incident. The baboons in Ethiopia in the mountainside were just as mean, but from farther away. The chimpanzees at the Mexico City zoo threw poop at the window and at each other. You mind your business, monkeys, and I’ll mind mine. Let’s just keep out of each other’s way, mmmkay?]

4 thoughts on “Batu Caves: The Monkeys Are Worse Than The Stairs”