I found paradise in the Gulf of Thailand. It had everything I look for in a beach island. Or so I thought…

There was lots of tree cover, gentle waves, beach bbqs, and no touts. I passed my days soaking up the sun, scarfing down endless tropical fruit, and snorkeling with giant sea turtles, cuttlefish, parrot fish, jellyfish, and sea cucumbers. 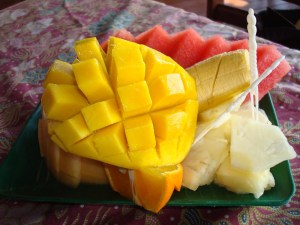 But it was not all sunshine and roses, as beach islands seem to be in all the holiday commercials.

They never show the bacteria in those ice cubes in your glass, or the sunburns you get the second day there when you slack on sunscreen, or the malaria/dengue fever from the one mosquito bite you got at dinner that night.

Tropical paradise is a risky place, folks. Here are a few other unadvertised dangers I experienced first-hand…

One day while swimming, I had the misfortune to learn about the existence of sea lice. No, they are not like head or body lice. They are like baby jellyfish, floating in clouds underwater, nearly invisible to the eye.

Imagine receiving tiny electrical shocks all over your exposed skin and being unable to escape them because you cannot see where they are.

Attack #2: A Crash of Coconuts!

Another unmentioned danger of the beach island is the coconuts. In the ads, you see the palm trees swaying in the island breezes. You see the coconuts growing in bunches and think to yourself, ‘that will make a tasty drink later’. The ads cut out what happens next, when the breezes blow a little too strongly and the coconuts rocket toward the ground, leaving a massive crater in the sand. As I stared into such a crater a foot or two over from where I was sprawled under the tree, I realized that, had that been my head, I would likely be unconscious.

There is a reason the beach loungers are not set up under the shade of the coconut palms. Keep your distance, kids.

One morning I lay in a hammock, blissfully swaying in the shade of my balcony at my treehouse chalet, and thought to myself, “despite the hiccups (such as sea lice and coconut rockets*), this may be the most wonderful place on earth”.

*And the staircase to my treehouse chalet, of course. 78 ricky old steps, in case you were curious. While not a ‘danger’, they were a downside (as many of you know, I am not fond of stairs, even though they lead to spectacular places like here).

“Why doesn’t everyone come here?” I thought to myself, closing my eyes.

And then I heard a large rustling on the forest floor two levels below me. I cracked open one eye and peeked over my hammock to look through the gaps in my wooden porch floor. Nothing…

Then I heard a large crack, as a big branch snapped on the ground. I softly rolled out of my hammock and lay down on the floor to peer through the space between the floorboards.

THERE WAS A DRAGON UNDER MY TREEHOUSE! 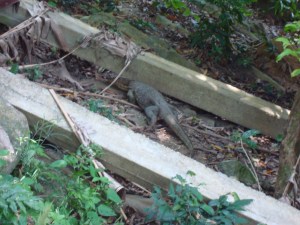 Alright, so technically he wasn’t a dragon. He was a monitor lizard. (And this is technically a photo of his smaller cousin who was only 3 feet long, because I was too scared to move/get my camera when I saw him).

HE WAS SEVEN FEET LONG AND OVER A HUNDRED POUNDS*. For you metric folks, HE WAS TWO METRES LONG AND 45 KG**.

**No, I did not weigh him. Approximation based on size and level of noise moving through the forest.

It may not be the scientific definition, but I classify anything big enough to eat me as a dragon. I learned an important lesson that day: Dragons/dinosaurs in theory = Awesome. Dragons/dinosaurs in real life = Super scary. I also learned that if you stay completely still, you may get lucky and the dragon will not come investigate how tasty you are.

Note: the dragons were also not mentioned in the brochures.

Have you ever had a bad experience on a beach vacation? Also, have you ever seen a dragon?

One thought on “Beware of Beach Islands…”