You should see the sound and light show at the Font Magica of Montjuic twice. I did.

But seriously, there are plenty of other things worth your time in Barcelona. 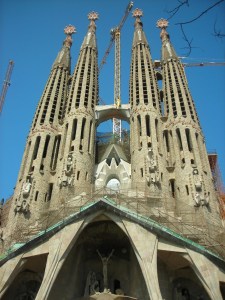 You can decide whether you love or hate Gaudi’s architectural style. La Sagrada Familia is probably his best known work, even though it isn’t finished and isn’t due to be finished for years still. There is lots more of his handiwork around town. My recommendation? Head uphill to the expanse that is Parc Guell, Gaudi’s very own Wonderland.

You can also chill at the city beach. You can dive in and float on the waves alongside plastic garbage from cruise ships. Or you could not swim. I wouldn’t.

You can wander Las Ramblas and check out the varying levels of talent by the buskers and street performers, such as lady-wearing-flowers-as-clothes.

Just don’t forget to also watch your wallet. There are pickpockets-a-plenty roaming the alleyways of the Gothic Quarter, the Metro stations, and the tourist areas.

Barcelona definitely has a lot going on and a lot to offer to visitors.

But you better not be doing any of this other stuff unless you’ve already been to the fountain show.

3 thoughts on “If You Only Do Two Things in Barcelona…”