The last few posts have been about the many great things to do in Barcelona. After all, I spent nearly two weeks there, which is as much time as I spent in some countries on other legs of my round the world trip.

As much fun as Barcelona was, by the time I left, I was suffering from a heavy case of travel fatigue. I had learned early on during this year long adventure that sometimes you need to have a break and recharge when your enthusiasm for tourism drops.

In this state of mind, I stumbled off a train that had ushered me to the heart of Spain. And the city of Madrid was there to give me the big hug that I needed.

I found myself a great downtown hostel with a kitchen, a couch, and laid-back crowd. Instead of rising early to pack activities into my days, I turned off my alarm clock and slept in. Instead of packing the standard complimentary toast and jam hostel breakfast in my bag and running out the door, I cooked myself omelettes and pancakes and oatmeal. Instead of walking miles all day taking in the sights, I ambled down the block to the grocery store and the pharmacy and ventured no further. 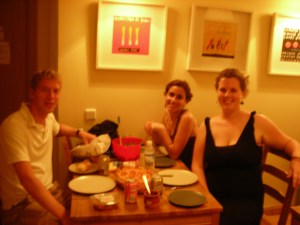 I ate home-cooked meals, watched movies, and called friends and family at home for almost a week until I started to feel my curiosity to explore this new city return.

Madrid had patiently waited for me and I rewarded the city with an extra week of time to make up for taking a “week off”.

The wonderful thing about spending a week in a city is that you are around for the budget-friendly ‘pay-what-you-can’ evenings that tend to take place mid-week for residents. The Prado Museum was a labyrinth of impressive but darkly themed masterpieces dating from 1100-1850. I don’t know a lot about art history but I recognized Velasquez’ classic “Las Meninas” and Goya’s gruesome “Saturno”.

I preferred the Reina Sofia Museum, the national museum of 20th century art and home to Picasso’s famous “Guernica”. 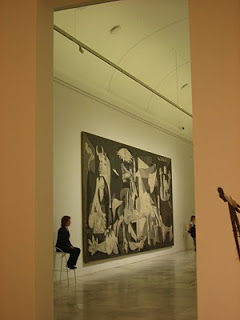 Lots of other big names in art to be found on the walls of this lovely, bright gallery: Klee, Miro, Kandinsky, Dali, and others. But Madrid had more to offer than its art galleries… 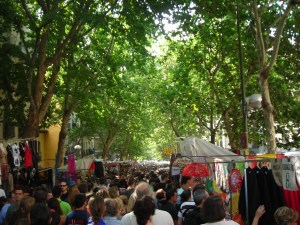 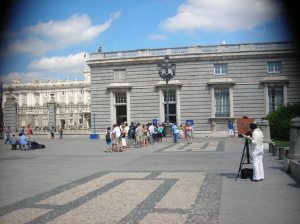 It gave me mornings of bargaining for scarves and second hand DVDs at El Rastro, the sprawling flea market that overtakes La Latina on Sundays. It gave me sunny siesta afternoons strolling the grounds of Retiro Park, watching people boating on a pond with the swans and listening to African drum circles practicing under the trees away from the heat of the day. It gave me evenings dining on tapas and sangria in Mercado de San Miguel and nights of busker musicians leading large crowds in singing the best of the Beatles in Plaza Mayor.

Madrid gave me so much at a time when I was low. It was more than a city. It was a friend. ❤

2 thoughts on “I Heart Madrid”