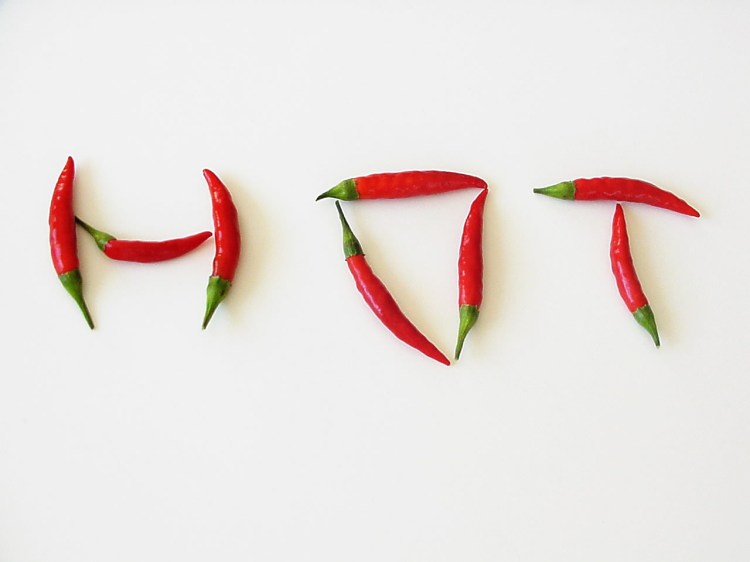 Photo courtesy of greenfinger on morguefile.com

Yes, believe it or not, Italy was among my top three spiciest meals around the world. If you are looking to amp up the heat in your pasta, ask for the chili oil. Chili oil is extra virgin olive oil that is infused with chili pepper flakes.

I traveled a good part of Italy with two Indian Canadian girls I had met and they were automatically offered chili flakes or oil for their pizza and pasta at every restaurant. One night, we agreed to add it to all our shared pastas. I was cautious, sprinkling a quarter of a teaspoon into the cream sauce on the cheese tortellini. My companions were bolder, drizzling a solid teaspoon or two over the penne and spaghetti. Four bites later, the tears were streaming down our faces. I was shocked at how hot the oil was. This was pasta laced with TNT. The alfredo tortellini had a better balance, since there was cheese to mellow the chili heat. While I would exercise caution when adding the chili oil, I would absolutely go for it again. Yum.

Southeast Asia is known for its love affair with chili peppers. I had been warned about Thailand, but it was an innocent-looking green curry in Malaysia that left a lasting scorch mark on the roof of my mouth in the region. You see, at that particular restaurant, it did not occur to the chef to add coconut milk to the curry to smooth out the sizzle factor. This leaves a pot of eggplant and beef that has marinated and stewed in 16 green chili peppers for a few hours. I had to admit defeat after three spoonfuls of that dinner. My teeth were like smouldering embers for the rest of the night.

Photo courtesy of greenfinger on morguefile.com

Mexican food became a fast favourite while I was there. Even the street food was outstanding. There was Tacos del Pastor from back alley restaurants in Playa del Carmen, full of slow roasted pork, pineapple, avocado and salsa verde; endless fresh-cut melon, pineapple and coconut from corner street carts; and extravagant Enchiladas Suizas (not Swiss, just covered in cheese).

Even the spiciest meal (which caused physical agony) was irresistible: a massive platter of spiced beef, chicken, pork, and fried onions and bell peppers arrived in a mini pot of embers surrounded by grated cheese, guacamole, salsa and all other types of toppings imaginable. Within three bites, my table had red faces, watery eyes and blistering lips. It was so delicious that I kept eating through the pain. I would go to Mexico again just for the food. I’d even order that red-alarm hot platter again.

Maybe with yogourt on the side though.

One thought on “My Mouth Is On Fire! My Three Hottest Meals Around The World”